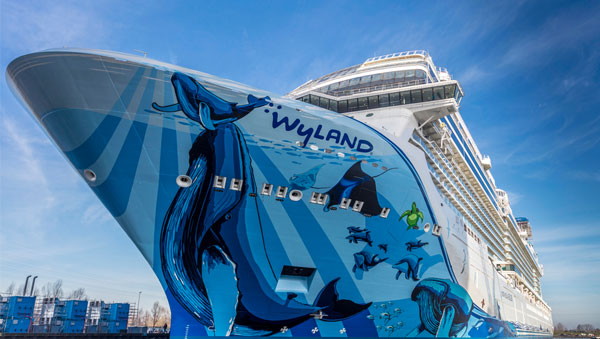 Norwegian Bliss, the third of Norwegian Cruise Line’s Breakaway Plus class, emerged from the Meyer Werft building dock in Papenburg, Germany on Feb. 17, representing a major milestone in the vessel’s construction.

The ship will remain in the shipyard port for the final phase of construction, until its conveyance down the River Ems towards the North Sea, scheduled for mid-March. During this time, the first crew members will move into their staterooms on board, begin their training, and familiarize themselves with the ship – readying it for the first guests to arrive after delivery in 60 days, on April 19.

The construction of the ship began in October 2016 with the traditional steel cutting ceremony launching the 12th NCL ship to be built at the Meyer Werft shipyard. It is the third ship in the Breakaway Plus class, measuring 1,082 feet in length by136 feet wide, with gross tonnage of 167,800 and accommodating approximately 4,000 guests.

Part of the excitement of the float out was the public debut of the ship’s signature hull artwork designed by world-renowned marine life artist and conservationist, Wyland. Best known for his marine life paintings, sculptures and grand scale murals, or “Whaling Walls,” Norwegian Bliss’ hull design is named “Cruising with the Whales” and features an image of a mother humpback whale and her calf as the centrepiece of the design, representing the beauty of Alaska’s wildlife.

Norwegian Bliss will be the first cruise ship custom-built with features and amenities for the ultimate Alaska cruise experience, including a 180-degree Observation Lounge where guests can enjoy Norwegian’s most expansive views at sea. It will also be the first NCL ship to make its debut in Seattle, with cruises beginning in May – weekly seven-day cruises to see America’s last frontier with ports-of-call including Ketchikan, Juneau and Skagway, Alaska, as well as Victoria, BC, along with scenic glacier cruising.