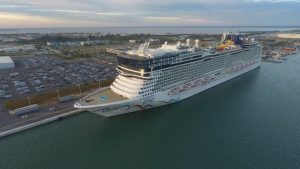 Epic returned to the US after having spent a year in Europe, where it underwent an extensive renovation as a part of The Norwegian Edge fleet revitalization program.

“We saw great success in Port Canaveral when we returned to the port last year with Norwegian Spirit, so we felt it made sense to take our commitment to the next level by bringing Norwegian Epic, one of our largest and most awarded ships, to sail from the greater Orlando area,” said NCL president Andy Stuart. “Norwegian Epic revolutionized the cruise industry when she debuted in 2010 and she arrives in Port Canaveral a nearly new ship, having undergone extensive renovations through the Norwegian Edge program, and will offer a variety of itineraries varying in length and ports of call. We think this will be a recipe for success and we look forward to having her in Port Canaveral in 2017 and 2018.”

Entertainment aboard Norwegian Epic includes new Broadway shows as headliners – Burn the Floor and Priscilla, Queen of the Desert – The Musical.