Now Is Not The Time To Turn Off The Tap 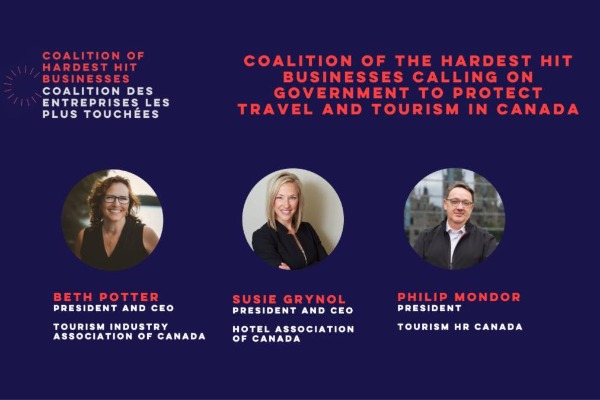 A coalition lobbying government on behalf of this country’s struggling tourism trade is calling on Ottawa to continue to make the Canada Emergency Wage Subsidy and Canada Emergency Rent Subsidy available to those in the travel sector.

The Coalition of Hardest Hit Businesses says tourism has been “devastated” by the coronavirus pandemic and resulting public health restrictions, border closures, travel bans, and the loss of international and domestic traveller.

The coalition says it understands safety measures were necessary given the nature of the pandemic but adds that CEWS and CERS programs have been lifelines for tourism businesses that would otherwise have been forced to close.

“Now is not the time for the government to turn off the tap of support,” TIAC president Beth Potter said during a Tuesday CHHB webinar.

Ottawa has decided to start winding CEWS and CERS down, believing that a financial recovery is underway.

A June TIAC survey suggested that nearly 60% of Canada’s hardest hit businesses will not survive if CEWS and CERS are not extended.

TIAC believes that with the increased uncertainty around the reopening of our international borders, the absence of major tourism events and conventions, and the slow return of business travel the tourism industry could see a potential collapse.

Susie Grynol, president and CEO of the Hotel Association of Canada, in turn told the webinar that many of her association’s members would “have closed their doors permanently” if CERS and CEWS weren’t available.

This country’s tourism trade has been “largely shut down for 15 months,” she stated.

Grynol said there is “pent-up demand” for travel but that isn’t translating into a recovery at this point.

Grynol said the federal government assumes that all industries harmed by the pandemic will have an equal opportunity to recover, something she said isn’t true for the hotel trade.

A fall recovery wouldn’t lead to huge revenues for hotels, with summer being far and away their busiest season, she continued.

Grynol said the hotel industry has seen widespread layoffs and, “We simply cannot allow these job losses to become permanent. We are headed towards an iceberg.”

Philip Mondor, president, Tourism HR Canada, in turn warned the winding down of CERB and CEWS will mean many businesses will have to let staff go and millions of Canadians will be out of work.

It says that Finance Canada has justified winding down the subsidies because they potentially provide a disincentive for businesses to reopen and rehire employees. “While this could be true for businesses dependent on a domestic customer base, it is not true for businesses in the tourism, travel and accommodation sectors that are still under heavy restrictions and international visitors are prohibited from coming to Canada,” the coalition said. “Lastly, the Canada Recovery Hiring Program (CRHP) is being boasted by the government as the program to replace the CEWS. However, it is inadequate for businesses that are not recovering. CRHP only provides funding to businesses to hire or rehire staff as business activity recovers.”

“Without continued tailored support for businesses that have been hardest hit, many tourism businesses across Canada will face difficult decisions on reopening, and won’t be able to pay their bills to be around in 2022,” added Potter.