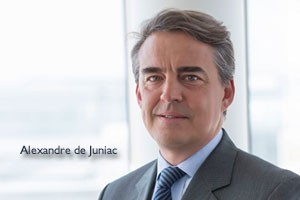 Capacity grew 6.2% and load factor climbed 0.8 percentage points to 80.8%, which was a record for the month.

October’s performance was a strong bounce-back after the hurricane-related disruptions in September. Domestic and international travel growth largely was in balance.

“As expected, the recent severe weather in the Americas region had only a temporary impact on the healthy travel demand we have seen this year, and we remain on course for another year of above-trend growth,” said IATA director general Alexandre de Juniac.

October international passenger demand rose 7.3% compared to October 2016, which was an improvement compared to the 6.6% demand increase for September. Airlines in all regions recorded growth. Total capacity climbed 6%, and load factor increased 1.0 percentage point to 79.4%.

Asia-Pacific airlines led all regions with traffic growth of 10.3% compared to the year-ago period, which was up from an 8.7% rise in September.

North American airlines’ traffic climbed 3.7% in October compared to the year-ago period, lowest among the regions, but an improvement compared to the hurricane-impacted 3% growth in September. Capacity rose 5.2% and load factor dropped 1.1 percentage points to 79.2%. North America was one of just two regions to post a load factor decline. There continue to be indications that inbound travel to the US is being deterred by the additional security measures now involved with travelling to that country.