Home › Airlines › Off The Beaten Path In Germany

Off The Beaten Path In Germany 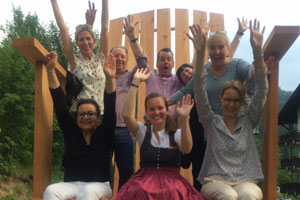 The German National Tourist Office, Lufthansa and the state of Bavaria teamed up to host a group of top travel executives from Canada late last month.

“The purpose of the trip was to showcase some of Germany’s lesser known attractions, but in addition the group visited the cosmopolitan city of Munich and had a chance to wear Lederhosen, as well as discovering all of the wonderful beer gardens, visiting the BMW world headquarters and learning about the royal purveyors of the former kings,” Splettstoesser writes.

“Participants also had the chance to discover unique off-the-beaten path experiences like hiking up Neuschwanstein Castle and overnighting in the picturesque town of Füssen – just a stone throw away from the castle.”

“The group also discovered that the visit to the small but quaint alpine village of Mittenwald – known for its wonderful craftsmanship of making violins — tastes even better when having lunch in a one star Michelin restaurant called the Market restaurant.”

“Here guests can experience world class cuisine for under $100 for a four-course menu. This can be combined with a rejuvenating 2.5 hrs walk to the 5 star castle Elmau which hosted the G7 summit in 2015. Guests passed by an alpine lake that is so appealing that even Stephen Harper could not resist to go for a swim.”

Splettstoesser said the group had an opportunity to learn about the mystic story of King Ludwig the second who, often referred to as the “mad king,” is well loved by his Bavarians up until today. He was a visionary who left the world with three breathtaking castles and brought back the art to Bavaria. It also witnessed animations of two additional castles which were never completed and learned that Ludwig 2 only travelled at night with a light on his carriages as he did not want to be seen by the public.

The Canadian travel executives found out that there are many stories to be discovered when their clients travel of-the-beaten path.

The journey continued, writes Splettstoesser, to the host city of the 1936 Olympic Games in Garmisch-Patenkirchen where the group took a float ride on a very special lake.

“It was here where the Ice Hockey games for the Olympic Games in 1936 were conducted. Even though the UK won the gold medal, the group was relieved to find out that the majority of the UK team consisted of Canadians.”

“Garmisch-Patenkirchen is also home to Germany’s highest mountain, the Zugspitze (2,962 metres). A new cable car will start its operations shortly boasting the world’s highest steel column of 127 metres. And no other cable car in the world spans such a distance between support pillars – a staggering 3,213 metres.”

“Undoubtedly the visit to Oberammergau was the highlight for most participants on this tour. The village has made their vowel with God in 1634 to perform the passion play every 10 years if God just saved them from the plague.”

“And since no life was lost afterwards, this is what the village of 5,000 inhabitants still lives up to until today. The group had the chance to meet “Jesus” (Frederik Mayet played the role of Jesus in 2010) and was fascinated to learn how the Oberammergauers’ keep everything within the village from the actors to the orchestra and the costume makers.”

“In order to be in the cast of unbelievably 2,000 people you have to be either born in Oberammergau or have lived there for 25 years. This big cultural highlight will take place again in 2020.”

To sum it all up, Splettstoesser writes that “the group had a lot of fun, learned so much about Bavaria’s diversity, outstanding hospitality and traditions, had amazing culinary experiences and thankfully walked more than 10,000 steps every day.”