Jon Montgomery On Why Home Is Where The Heart Is 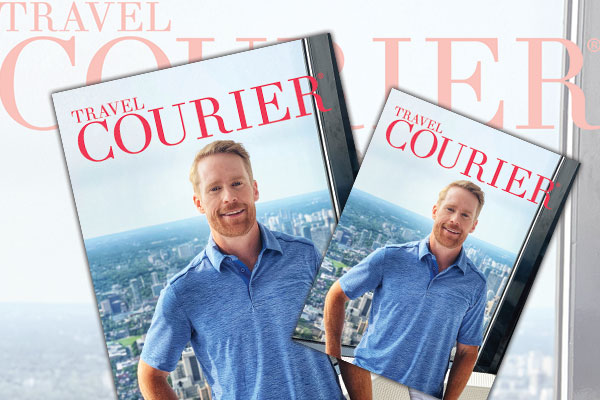 Olympic gold medalist and host of The Amazing Race Canada Jon Montgomery is a proud Canadian – so much so that he reacts viscerally when talking about his homeland, writes assistant editor, Ann Ruppenstein in this issue of Travel Courier Digital.

“I don’t know why my body is reacting the way it is, but every time I think about the stuff that I’m happy and proud of, I get goosebumps,” he tells Travel Courier as the hair on his arm rises while discussing the feel-good musical Come From Away. “It’s ingrained in every fibre of my being – just talking about being Canadian gives me goosebumps.”

On location 114 storeys above Toronto on the lookout level of the CN Tower for an event with Expedia Canada, Montgomery said he starting exploring the country while growing up in Russell, Manitoba.

“My very first road trip was at five weeks old. It was almost my last road trip because they forgot me on a picnic table at one of the stops and soon realized they were travelling a little bit light a few miles down the road and came back to fetch me,” he said. “But I made it back in that van – true story – and I’ve been exploring Canada ever since that day without the same sort of near-death experiences. Being able to do that as a youngster put the notion in my mind that this land of ours is incredibly special and varied.”

Although he went on to travel the world as an athlete and through various seasons of The Amazing Race Canada, he maintains there’s something special about home.

“When I got involved in sport and sport became a vehicle for me to be able to traverse this land and go around the world for that matter, through international travels I realized that what was in Canada was tremendously special, and that we didn’t have to go to far-flung places to have exotic, amazing, unique discoveries and experiences, we could do that here in Canada,” he said. “I think the best scenery is on the west side, I think the best people are on the east side and I think the north has the spiritual centre of this country, lock, stock and barrel.”

So where are his favourite Canadian travel haunts?

Well, for that, you’ll have to check out the July 25 issue of Travel Courier Digital.