Home › Airlines › Oh What A Flight

Oh What A Flight 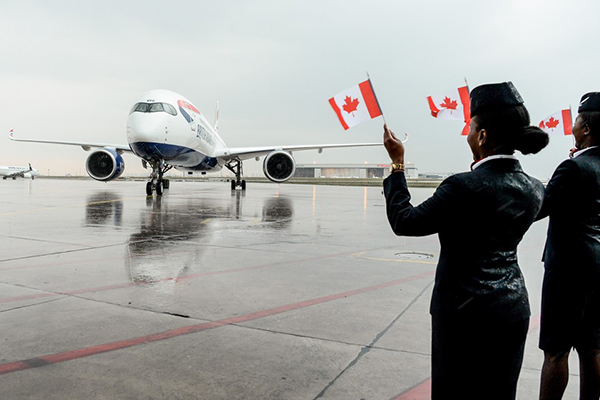 With passenger capacity of 331, including 56 Club Suite compartments, the A350 began long-haul service with Dubai last month, and will add Tel Aviv and Bangalore this winter.

The A350 has already flown over 15,400 miles between London and Madrid, completing 40 take-offs and landings to put the aircraft through its paces, test all aspects of the technical performance and familiarize crew with service delivery.

Luckily for Canadian passengers, Toronto is one of two inaugural long-haul routes for this new Airbus due to a moderate number of daily departures and length of flight. Toronto is often considered the perfect long-haul route for training new British Airways crew and introducing aircrafts.

“We’re thrilled to be launching our new A350 from Toronto, a city we’ve flown to and from for nearly 60 years,” said Gerard McEvoy, VP Sales, North America. “The A350 and our new Club Suite business class seat deliver new levels of sophistication, comfort and privacy, and we’re proud to share this with our Canadian customers.”

Watch for more in an upcoming issue of Canadian Travel Press.