Home › Destinations › On Key In Texas

On Key In Texas 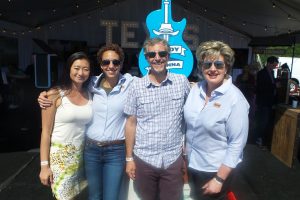 “In Austin and all the other cities in Texas, visitors can experience our world-class and varied music scene,” Hunter said. “From country music, swing, rock to folk, Texas has world-class local talent and incredible live music venues and nightclubs in destinations across the state.

“Influenced by many cultures, the music scene in Texas is varied, thriving and world-class. The state is not only home to music greats Buddy Holly, Willie Nelson and Stevie Ray Vaughan, but also some of the best live music venues and festivals in the world.”

Texas underscored its musical ties at North by Northeast by having replicas of guitars placed at different festival locales and giving away T-shirts that sported a guitar image.

“We definitely have great dude ranges, Western experiences and BBQ but we also have a lot of things people don’t associate with Texas,” he said citing the likes of golf, diverse landscapes and beaches.

Fans of the TV show Dallas can visit the actual Dallas-area ranch used as the Ewing home for the show. “It’s still a very popular attraction,” Fennell said.

Fennell said winter is the peak season for Canadian visits, but Texas is hosting Canadians throughout the year. “We’re seeing good, steady growth, despite the currency exchange. I think Texas is still a good value.”