Home › Destinations › On The Road in Thailand

On The Road in Thailand 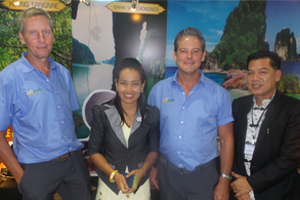 PressToday’s Ian Stalker was on hand as Tourism Minister Kobkarn Wattanavrangkul told a gathering at a museum dedicated to contemporary art that, “Thailand is beautiful, but Chiang Mai is a very special place… This is a living, creative town.”

Thailand traditionally hosts huge numbers of visitors each year, but those visitors sometimes largely bypass some parts of the country, with northeastern Thailand often overshadowed by other areas. Wattanavrangkul said her “personal mission” is to boost the numbers of tourists to northeastern Thailand, a part of the country she said has Thai, Vietnamese, Laotian and Cambodian influences, making it intriguing for visitors.

Meanwhile, Wattanavrangkul said tourists visiting her homeland can enjoy a range of activities ranging from such mainstream sports as golf to trying physically challenging ones, like Thai kick boxing.

Among those on hand for Thailand’s tourism show is transplanted Vancouver resident Jud Darwel (second from right in the photo), who works for Lifestyle, which can provide tours to such iconic Thai sights as James Bond Island.

Posted in Destinations, On The Road Again
Categories