Ontario Parks: A Time To Remember 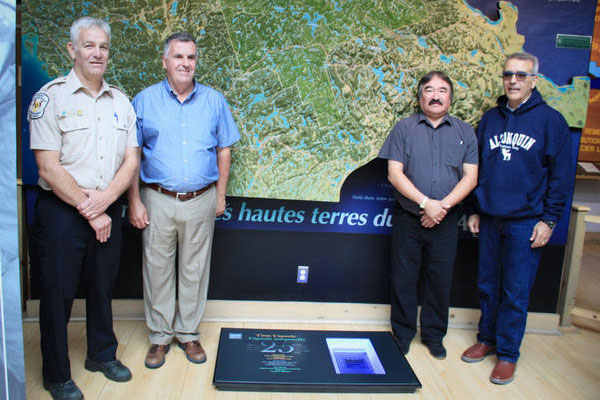 Ontario Parks – which this year has been celebrating a major milestone – on Wednesday began looking forward to another upcoming one.

Ontario Parks officials placed a time capsule in the floor of the Algonquin Visitor Centre in Algonquin Provincial Park, with the stainless steel unit containing documents, letters, photographs and memorabilia.

Plans call for the time capsule to be reopened in 25 years to celebrate Ontario Parks’ 150th anniversary.

“Time capsules inspire us to think about the future of the provincial park system and provide an exciting way to communicate with people enjoying parks 25 years from now,” Ontario Parks said.

Algonquin Park was Ontario’s first provincial park and today the province has 340 of them, which collectively amount to almost 8% of Ontario and cover an area larger than Nova Scotia and PEI together.

Ontario Parks is marking its 125th anniversary this year with a number of initiatives, among them an art-based program designed to connect people with nature through hands-on art activities being offered through the province.

Other initiatives include stewardship programs aimed at protecting biodiversity in parks. Those programs include the likes of wildlife monitoring and invasive species removal.

Meanwhile, Ontario Parks’ Learn to Camp Program teaches participants how to camp, covering such topics as setting up a camp, outdoor cooking, building a campfire and nature knowledge. The program is offered in eight Ontario parks.

“We invite you to celebrate our anniversary all year with special events, cultural heritage programs, stewardship activities, a concert series and a series of legacy projects,” Ontario Parks continued. “Make 2018 the year to visit the stunningly beautiful landscapes of our province, carry on traditions and make new memories.”