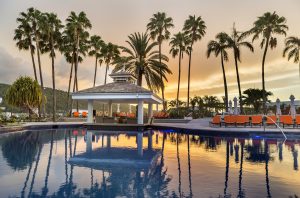 The international superstar will take the stage at the resort’s Grand Ballroom on April 1. Sean Paul rose to fame in 2002 with the success of his Dutty Rock album that included two Billboard Hot 100 chart toppers, “Gimme the Light” and “Get Busy,” and won the Grammy for “Best Reggae Album.”

Since then, he has released six studio albums and a long list of hits including “She Doesn’t Mind,” “I’m Still in Love with You,” “Temperature” and chart-topping collaboration with Beyoncé, “Baby Boy.” In addition, Paul won the American Music Award for “Favorite Pop/Rock Male Artist” in 2006, and has won MTV Music, BET and MOBO awards, among various others accolades.

Palace Resorts is offering guests who book a stay of five nights or more two complimentary tickets in the Gold section to the concert as part of the all-inclusive concept. Guests can purchase tickets for the exclusive VIP section and have access to a lounge area, snacks and private bar.

Palace Resorts’ all-inclusive accommodations start at US$172 p.p., per night, based on double occupancy.