Home › Agent Incentives › Petra Nemcova Teams Up With U By Uniworld

Petra Nemcova Teams Up With U By Uniworld 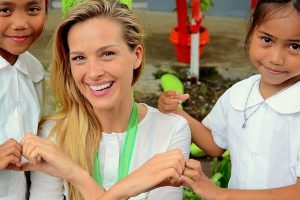 Nemcova will join contest winners on the invitation-only “Sneak Peek” U sailing Oct. 7-11.

According to Ellen Bettridge, president & CEO of Uniworld, the selection of a “Guardian Angel” for the brand is simply another example of U’s status as a game-changer.

“We’re making history with this concept, so rather than follow the traditional ‘Godmother’ path for each individual ship, we’re paving our own way forward,” says Bettridge. “Petra is an amazing representative of our new brand; she’s smart, ambitious and has a kind, adventurous spirit. As a former Victoria’s Secret model, Petra is, of course, well-versed as an ‘Angel.’”

With a Paris to Paris itinerary and invitation-only guest list featuring top social influencers, media and contest winners, agents lucky enough to join the debut celebration launch in October will fully experience U, with a mix of the best onboard and onshore “U Time” experiences.

To enter, travel agents ages 21-45 must create and post a 30-second video to the U by Uniworld Facebook page sharing how they are going to sell U, tagging #I’mGonnaSellU to their post. Uniworld’s internal Advisory Board will vote on the final winners from entries with the most likes on Facebook. Selected content will be featured on ubyuniworld.com. Entries are being accepted through Aug. 15, 11:59 p.m.