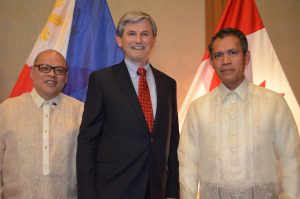 This marks the declaration of independence from Spain in 1898 and prominent Filipinos in Vancouver marked the occasion with a gathering at the downtown Coast Coal Harbour hotel.

Neil Ferrer, the Phillipine consul general for Vancouver, led the proceedings with an address that noted increasing business cooperation between Canada and the Philippines. Also in attendance and taking his turn at the podium was Andrew Wilkinson, the BC minister of advanced education. Joining them for a photo was Allan Coo, Canada country manager for Philippine Airlines.