Home › Pix of the Trade › Aeromexico Has Big Plans For Canada

Aeromexico Has Big Plans For Canada 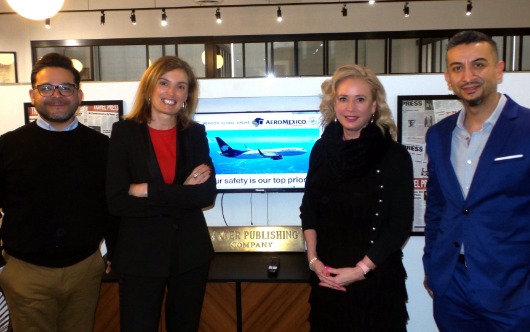 Aeromexico is increasing its presence in Canadian airspace.

An Aeromexico delegation that visited Baxter Media’s Toronto office Tuesday (Feb 22) reported that the carrier will be adding flights on its routes that link each of Montreal, Toronto and Vancouver with Mexico City.

Aeromexico will feature 14 Vancouver flights a week in March, a figure that will rise to 17 a week in June and triple daily flights are planned in July.

Montreal sees 10 weekly Aeromexico flights in March and there will be double-daily service to that city in July.

Most Aeromexico fares from this country allow for a one- or two-day stopover in Mexico City. Mexico traditionally has been viewed as a beach destination but Aeromexico’s Rocio Blazquez Reyes says there’s growing interest in other sides to the country, including its cuisine, culture and nature.

“The beauty of Mexico is you have a country that’s full of different experiences for every budget,” she said.