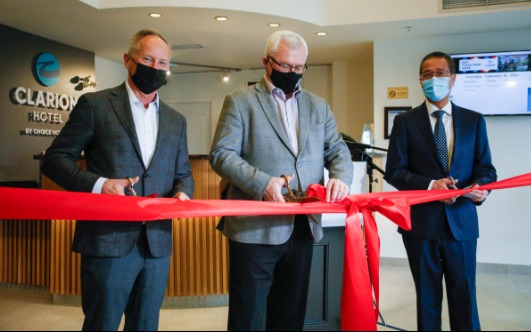 Choice Hotels Canada is celebrating the reopening of the Clarion Hotel & Conference Centre in Abbotsford following the devastating flooding in November 2021 that forced an evacuation and caused serious damage to the property.

Two employees of the hotel who acted heroically during the crisis, going above and beyond the call of duty, were honoured by the property with Employee of the Year awards at a reopening ceremony and ribbon cutting that took place on Feb. 10, with Mayor Henry Braun and the President of Choice Hotels Canada, Brian Leon.

During the event, Leon observed: “This unprecedented event happened in the midst of COVID-19 recovery in our industry and one can understand how difficult it has been for the owners, managers and staff at this hotel. But what is remarkable was their phenomenal reaction to what happened, and their ability to overcome what can only be described as severe hardship. We were delighted to be on site for this good news milestone and see them reopen their doors to guests.”

On Nov. 15, 2021, Abbotsford suffered heavy rain due to atmospheric rivers. The area of Sumas Prairie was badly flooded and subsequently evacuated. The flood was caused by the Nooksack River overflowing its bank across the border in the U.S., and the Sumas River breached the Sumas Dyke.

Despite the fact that the hotel was not located in the flood plains, it was evident within 24 hours of the city’s general evacuation order that the hotel, due to rising waters, would also be evacuated. A significant section of Highway 1 was also under water and completely closed to traffic for approximately two weeks after.

At the peak of flooding, the lobby was submerged in 10 inches of water. The entrance to the conference centre was submerged in over three feet of water, with water levels halfway up the door. The many vehicles parked at the hotel were later declared as write-offs. No guests or staff were hurt during the evacuation, however due to contaminated flood waters, the hotel required significant repairs. The property replaced flooring, drywall and furniture, the entire contents of the maintenance shop and storage, including banquet furniture and machinery that was destroyed, as well as two elevators in the hotel and two in the conference centre. 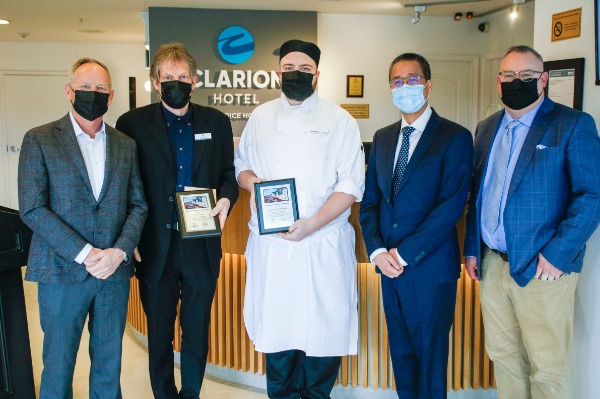 Valentina Tang, asset manager for The Wanson Group, owners of the hotel, explained that: “There were two employees, Gavin Dememdonca and Ben Larsen, who acted heroically during the crisis, and we were thrilled to honour them at the reopening ceremony. This type of devotion, personal accountability and incredible initiative has earned them both 2021 Employee of the Year awards from the Clarion Hotel & Conference Centre.”

Gavin Dememdonca is the Chef de Partie at the property. To assist the stranded hotel guests, he swam to the hotel – through water contaminated with farm fertilizers and deceased animals – to prepare complimentary food for hotel guests.

Ben Larsen is the hotel’s night auditor. After the City of Abbotsford issued the evacuation order, no one was allowed to be at the hotel.  Of his own volition, not requested by management, he rode his bike to the hotel to watch over the property overnight in the freezing cold. Hotel management found out after he reported to the Front Office Manager that all was secure in the morning.

Back of the house areas in the hotel, including administration offices, maintenance shop and storage are still undergoing refurbishment. Full restoration is expected by April 2022.

Go to www.choicehotels.com for more.