Home › Pix of the Trade › Air Transat helps out 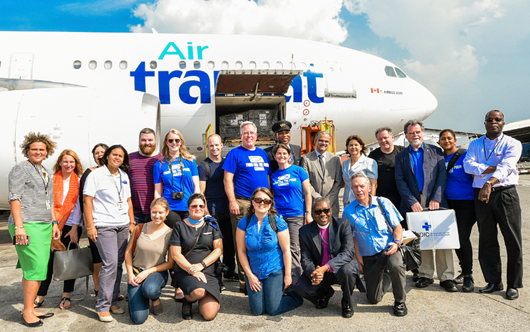 Sixteen skids of medicines and 2.8 million water purification tablets were delivered yesterday (Nov. 15) to Food For The Poor (FFTP) in Haiti. The operation was made possible thanks to a partnership between Air Transat and FFTP who flew 25 tons of basic necessities as well as aid workers from Montreal to Port-au-Prince. The emergency-relief flight was seen off in Montreal by Jean-Francois Lemay, president of Air Transat, and the Ambassador of Haiti to Canada, Frantz Liautaud. It was welcomed in Port-au-Prince by the Canadian Ambassador to Haiti, Paula Caldwell St-Onge, along with Bishop Oge Beauvoir, executive director of Food For The Poor Haiti. After the flight cargo was unloaded, the group was taken on a tour of the FFP Haiti warehouse where 300 Haitian staff distribute food to 250,000 people every day, and support public hospitals and clinics across the island with medicines and supplies.