Home › Pix of the Trade › AQSC Christens The American Countess 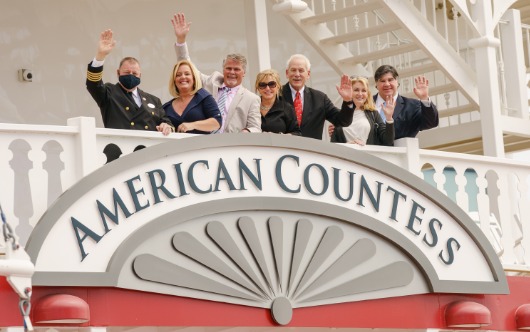 The christening follows the American Duchess’ recent return to service with reduced guest capacity on March 15 on the Mississippi River.

The American Empress and flagship American Queen will sail later this year.

AQSC resumed its operations with newly enacted health and safety protocols which include, but are not limited to, mask mandates in all public areas where social distancing is not possible, 100% testing of all guests and crew and mandatory COVID-19 vaccination for all guests and crew that will go into effect for all sailings beginning July 1, 2021.

John Waggoner, founder and CEO of American Queen Steamboat Company, said: “As we celebrate the grand debut of the American Countess, I could not be more appreciative of the incredible team that made it possible. We listened to our returning guests’ feedback on what they would like to see in a new riverboat and created a contemporary American masterpiece that guests are eager to experience.”

In its debut following the christening, American Queen Steamboat Company is hosting an abbreviated VIP cruise aboard the American Countess from March 21 to March 28, 2021 from New Orleans sailing northward along the Mississippi River, stopping in Nottoway and Natchez. The christening event on March 21 took place at the Mansion House at Mardi Gras World and dockside.

Following the christening and preview cruise, the American Countess will begin her maiden voyage revenue cruise on March 28, 2021, sailing from Memphis to New Orleans.

Sail on over to www.americanqueensteamboatcompany.com for more.