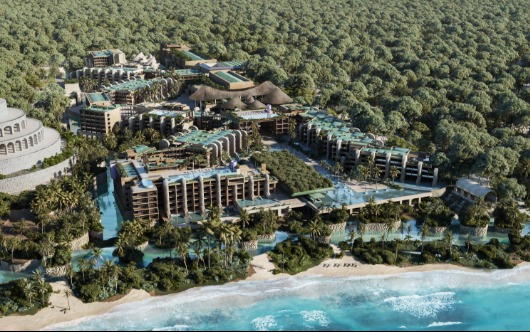 The second hotel project from Xcaret Hotels officially opened its doors to guests on July 1, offering them a roster of unique opportunities to “live art.”

Hotel Xcaret Arte, Grupo Xcaret’s second property, is an adults-only hotel (welcoming guests 16 years and older) that features 900 suites designed as an homage to the arts of Mexico.

Hotel Xcaret Arte integrates the brand’s “All-Fun Inclusive” concept that revolutionized the tourism industry worldwide, offering hotel guests unlimited access to Grupo Xcaret’s Parks and the most attractive experiences in Cancún and Riviera Maya including roundtrip transportation to the parks, hotels and airport. Within its all-inclusive concept, Grupo Xcaret hotels offer exceptional culinary experiences with restaurants led by some of Mexico’s most renowned and world-class chefs.

The hotel’s eco-integrated design and architecture pays homage to Mexican art in its various iterations, highlighting the most important symbols and artistic expressions of Mexico’s culture through the creation of six distinct Casas.

Hotel Xcaret Arte will also be the centre stage for big events, celebrations, and concerts with two Convention Centers and an entertainment stage, located in Casa del Patrón, that can host between 1,140 and 2,065 people, respectively.

For groups large and small, the hotel offers cozy spaces that can accommodate intimate working sessions. Additionally, the resort is home to an Ecumenical Chapel with breathtaking views of the Mexican Caribbean offering different types of ceremonies for up to 120 guests.