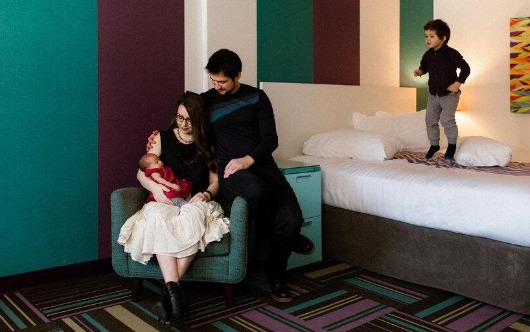 A couple who took advantage of Hotel Zed’s viral “Nooner Babymaker” package have given birth to a baby girl, inspiring the campaign’s triumphant return on February 14, 2021.

The bold hotel brand became a media sensation last Valentine’s Day after introducing a playful campaign encouraging lovebirds to indulge in a midday romp. As a frisky bonus, the package offered a free stay every Valentine’s Day for the next 18 years to any guests who birthed a child nine months after check-in. In December, Nicole and Alex – the couple who became pregnant thanks to Hotel Zed’s feisty offering – welcomed a new baby girl into the world, adding to their family of three.

This year, with safety protocols firmly in place, Hotel Zed is once again encouraging local lovebirds to treat themselves to a saucy, four-hour Valentine’s Day escape. The promotion is open to families of all kinds, whether that be through IVF, surrogacy or adoption. As long as the baby arrives within nine months of check-in, the parents will receive a complimentary annual stay for 18 years.

“The Nooner campaign was meant to restore excitement around Valentine’s Day, but we never expected it would create such joy. We were so excited to meet this beautiful baby girl, after nine months of waiting almost as eagerly as her parents!” said Mandy Farmer, president and CEO of Hotel Zed. “We’re looking forward to re-introducing the Nooner this Valentine’s Day, and continuing to spread the love – and meeting Hotel Zed’s love children – for many years to come.”

Hotel Zed’s Nooner package starts at $49 for four hours; to extend the romance, splurge on an overnight stay for $79 in Kelowna, $99 in Victoria and $169 in Tofino. While the campaign is targeted to locals, the Hotel Zed team looks forward to welcoming out-of-town travellers when it’s safe to do so. For more information, or to book, visit hotelzed.com.