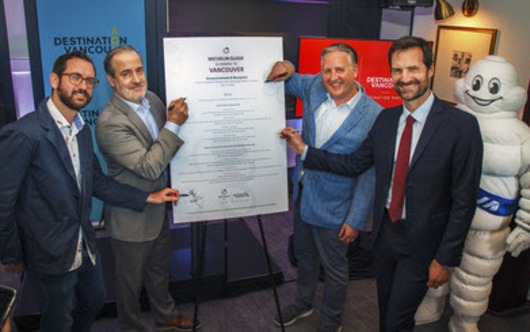 The inaugural edition of the MICHELIN Guide Vancouver with the selection of local restaurants receiving honours will be announced this fall. Inspectors award MICHELIN Stars – One, Two or Three – to unparalleled cuisine.

The Guides also bestow Bib Gourmand ratings on restaurants that offer great quality food at good prices, and award the MICHELIN Green Star to restaurants that are leaders in sustainable gastronomy.

Royce Chwin, President & CEO, Destination Vancouver, said: “Vancouver has long enjoyed tremendous acclaim for our culinary scene and the MICHELIN Guide Vancouver further elevates the city’s reputation as a global dining destination. What is really exciting is that aspiring young chefs who want train under the guidance of a MICHELIN-starred team now have the opportunity to do that in Vancouver.”

With the announcement, Vancouver joins Toronto as the only MICHELIN Guide destinations in Canada and among the seven in North America.

Vancouver Mayor Kennedy Stewart said: “I’m thrilled Vancouver is taking its place on the world culinary map with the upcoming fall MICHELIN Guide Vancouver. Locals and visitors have long enjoyed the diversity and innovation of Vancouver’s food scene, and I can’t wait for the rest of the world to get a taste. My thanks to Destination Vancouver for all their hard work. On behalf of Vancouver’s restauranteurs, servers, suppliers, chefs, kitchen staff, sommeliers and bartenders who make our city such a special place, it’s my honour to welcome Michelin to Vancouver.”