New Thrills At EPCOT As Guests Save The Galaxy 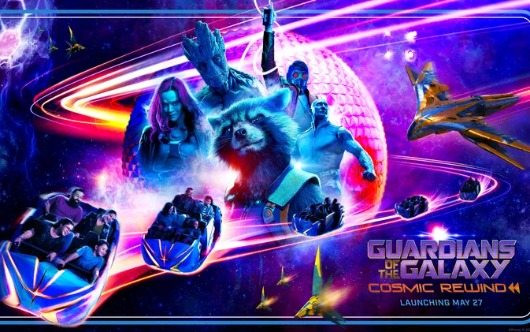 Saving the galaxy this time is gonna take more than a dance-off. Starting May 27, 2022, guests visiting EPCOT at Walt Disney World Resort better get ready to crank up the mixtape and blast through an awesome intergalactic chase through time and space in Guardians of the Galaxy: Cosmic Rewind!

This new family-friendly coaster matches the “grandosity” and fun of the blockbuster “Guardians of the Galaxy” films, featuring those lovable cosmic misfits – Rocket, Groot, Drax, Gamora and Star-Lord. The attraction is another major milestone in the ongoing transformation of EPCOT and debuts as part of the Walt Disney World 50th Anniversary celebration.

Located in the park’s newly renamed World Discovery neighbourhood, Guardians of the Galaxy: Cosmic Rewind will be the first “other-world” showcase pavilion at EPCOT. Xandarians travelled from their homeworld in the Andromeda galaxy to Earth – or Terra, as they call it – to build this Wonders of Xandar pavilion, inviting EPCOT guests to learn more about their people and their advanced technologies. Until the Guardians arrive, anyway, and adventure ensues …

In addition to the Wonders of Xandar pavilion, Guardians of the Galaxy: Cosmic Rewind will offer several other “firsts,” including:

Xandarians have come to Earth and are hard at work building their new EPCOT pavilion. Highlights include: