Home › Pix of the Trade › Shooting for the Stars

Shooting for the Stars 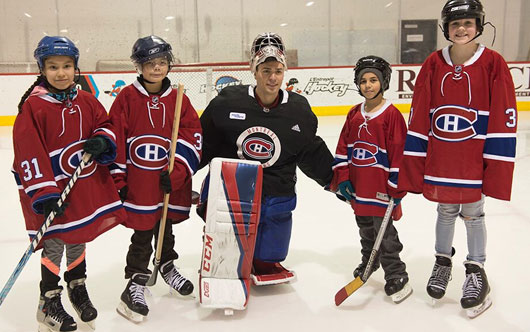 For the fourth consecutive year, four lucky youth from the Indigenous communities of Anahim Lake, Williams Lake and Quesnel, BC were treated to an unforgettable experience in Montreal courtesy of Shooting for the Stars, an event organized by Breakfast Club of Canada and the Air Canada Foundation, and sponsored by Club Ambassadors Angela and Montreal Canadiens’ goaltender Carey Price. A native of the Ulkaltcho reserve in Anahim Lake, Price was moved by the unique and inspiring stories of the candidates proposed by their school administrators. The four youth, who are currently receiving Breakfast Club services, stood out for their determination and perseverance. From Jan. 20-24, Jayden from Williams Lake, Christian and Annika from Anahim Lake, and Savhannah from Quesnel, were hosted by the Sheraton Hotel Montreal and visited the city with their chaperones, participating in a program of activities co-ordinated by the Breakfast Club and the Air Canada Foundation. In addition to attending a Canadiens game against the Colorado Avalanche and enjoying the privilege of being seated in Air Canada’s private box where they were greeted by Price, they also had the opportunity of skating with Price at the Bell Sports Complex.