Home › Pix of the Trade › Viking Floats Out Its New Ship

Viking Floats Out Its New Ship 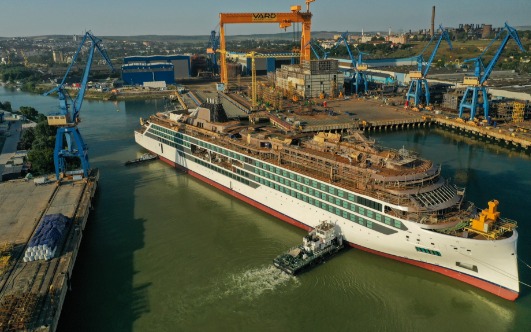 Viking floated out its second expedition ship — the 378-guest Viking Polaris  — marking a major construction milestone and the first time that the new ship touched water.

Scheduled to debut in the summer of 2022, Viking Polaris will spend its maiden season sailing voyages to the Arctic and Antarctica; its identical sister ship, Viking Octantis, was floated out last December and is set to debut in early 2022 for journeys to Antarctica and North America’s Great Lakes.

Viking has also developed a series of short videos about the new expedition voyages, ship design and prestigious scientific partnerships, which can be found at https://www.vikingcruisescanada.com/expeditions/video/all/index.html

The float out is significant because it denotes a ship moving into its final stage of construction. The float out ceremony of Viking Polaris took place on July 27 and following it, the ship was moved to a nearby outfitting dock for further construction and interior build-out.

After final outfitting, Viking Polaris will be delivered at Fincantieri’s VARD shipyard in Søviknes, Norway.

For more, go to www.viking.com .