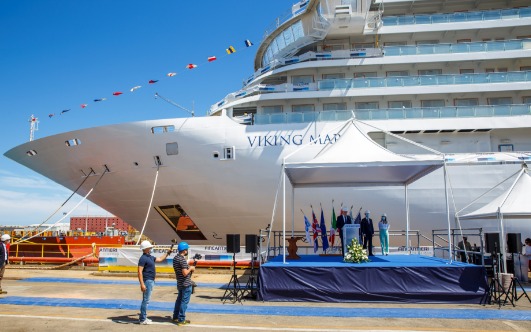 Viking has floated out its newest ocean ship, the 930-passenger Viking Mars – and announced that the ship — scheduled to debut in early 2022 — will officially be named by its ceremonial godmother, Lady Fiona Carnarvon, the eighth Countess of Carnarvon.

The Viking Mars will spend its maiden season sailing itineraries in the Mediterranean and in Northern Europe before embarking on voyages in Asia and Australia.

The traditional float out ceremony took place at Fincantieri’s Ancona shipyard and is significant because it denotes a ship moving into its final stage of construction. The float out of Viking Mars began at approximately 11:00 a.m. local time when a member of the Viking team cut a cord that signalled water to begin flowing into the ship’s building dock. Following a two-day process that will set Viking Mars afloat, she will then be moved to a nearby outfitting dock for final construction and interior build-out.

The announcement that Lady Carnarvon will serve as the godmother to Viking Mars builds on the longstanding relationship between Viking and the Carnarvon family.

Since 2013, Viking has offered guests a variety of ways to experience life at Highclere Castle, the home of the Earl and Countess of Carnarvon, and known as the filming location of Downton Abbey. Privileged Access Pre/Post Cruise extensions co-created by Karine Hagen and the Carnarvon family include Oxford & Highclere Castle — Viking’s highest rated Pre/Post cruise extension — and Great Homes, Gardens & Gin,  both of which are available for guests on select river and ocean itineraries.

Also, for guests on the popular Pharaohs & Pyramids Nile River cruise itinerary, Viking offers the five-day British Collections of Ancient Egypt Pre-Cruise Extension, which gives guests an introduction to Egyptian antiquities in preparation for their Nile experience, and includes retracing the steps of the world’s most famous Egyptologist, Howard Carter, and his benefactor, the 5th Earl of Carnarvon. Guests experience Privileged Access to archives and museum exhibits not normally accessible to the public, and at Highclere Castle, have the opportunity view the earl’s magnificent private collection of Egyptian artifacts.