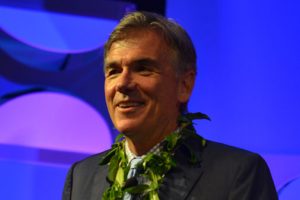 The message was a bit murky beneath all the sports terminology and entertaining anecdotes, but baseball icon Billy Beane nonetheless had a lesson for tourism stake holders during his keynote address at a conference in Hawai’i this week.

It was all about numbers and statistics – the key to Beane’s storied success in professional baseball – and he encouraged delegates at the 2017 Global Tourism Summit in Waikiki to closely watch and use those as part of their business strategies.

Rodriguez, the senior policy advisor for Conservation International, specializes in tracking the progress of the climate change and its impact on the planet – including the global tourism industry.

Beane’s careful study of player stats to render an unlikely success story for the underfunded Oakland As in the early 2000s led to first a book, then an award-winning movie (Moneyball).

Rodriguez hopes that tourism operators take the essence of that same methodology to heart as they look for ways to survive and thrive in a changing climate environment.

“Billy Beane took a data-driven approach to bring success to his team,” said Rodriguez, referring to the keynote presentation by the charismatic manager at the Summit, held at the Hawai’i Convention Centre.

“We have to use big data analysis to quantify the negative impacts of climate change. And then use this information to persuade companies and governments to change their policies,” said Rodriguez. It was an eye-opening lesson to be learned from a game of bats and balls.

The 2017 Global Tourism Summit is running until Sept. 21.

Photo: Billy Beane of the Oakland As makes his keynote presentation at the 2017 Global Tourism Summit this week.