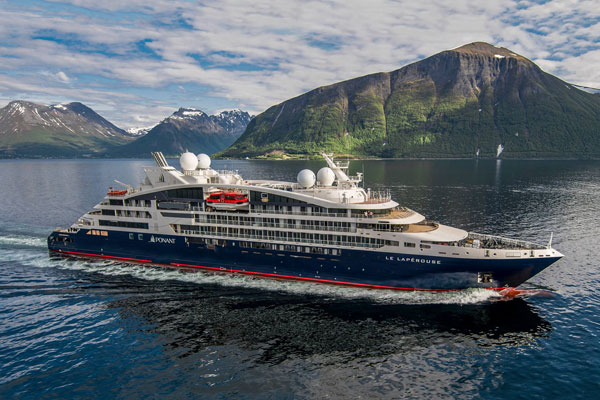 Luxury French line PONANT will continue to broaden its horizons this year with the addition of two new ships and nearly 40 new itineraries across the fleet.

From March to December, the ships will chart new courses through destinations such as North America, Africa, Europe, Caribbean, the Arctic and more.

The PONANT EXPLORERS fleet will double this year with the addition of Le Bougainville and Le Dumont-d’Urville. Making their maiden voyage through the Baltic and Mediterranean, both ships will feature an innovative Blue Eye lounge – the industry-first, multi-sensory space that allows guests to experience the sub-aquatic world through sight, sound and feel.

Le Bougainville will set sail on April 15 with an all-new seven-night Mediterranean Islands sailing. After leaving Nice, the 92-stateroom ship will travel towards the historic city of Bonifacio before stops in the Amalfi Coast, Sicily, Crete, Nafplion, and finally Athens. Additional ports of call for Le Bougainville will include Istanbul, Barcelona and Lisbon.

Le Dumont-d’Urville will make its debut on Aug. 7 with an eight-night sailing called the Historic Cities of the Baltic Sea. The ship will continue throughout the region with stops in Copenhagen, Stockholm, Honfleur, Dakar and Lisbon.

Le Champlain – one of the line’s newest ships – will make two North American sailings in the fall. The ship, which features the industry-first Blue Eye lounge, is set to travel through the Great Lakes on two 10-night journeys that will span both Canada and the US. Departing Quebec on Sept. 12, Le Champlain will travel along the Saint Lawrence River, across the Thousand Islands archipelago, and into Toronto for its first port of call. The journey then continues through each of the Great Lakes, passing sights such as Niagara Falls and Flowerpot Island before ending in Milwaukee on the shores of Lake Michigan. The ship will then make the return journey on Oct. 6.

PONANT has also unveiled nine new itineraries along the African coastline for 2019 with destination highlights including Egypt, Israel, The Canary Islands and the ancient landmarks of the Red Sea. In December, the brand will offer two opportunities to experience The Essential Seychelles. The eight-night sailings will explore the archipelago’s Inner Islands where guests can see the Aldara giant tortoises, vast coral reefs, and the unique sea coconuts of the Vallée de Mai nature reserve.

A new 11-night sailing from Dublin to Tromso is on the docket for PONANT’s European sailings. Guests of the trip will be met with the varied wildlife of the North Atlantic while also visiting sites such as the Norwegian fjords and the former Viking trading post of Kirkwall. In warmer waters, new Mediterranean sailings will include trips between Naples and Venice, an Eternal Aegean trip between Valletta, Malta, and Istanbul, and an Athens to Antalya along the “turquoise coast.”

PONANT guests will be able to see the Caribbean like never before as Le Champlain and its underwater Blue Eye lounge embark on a selection of new sailings throughout the region. Sailing through the warm waters ideal for looking out on to the surrounding aquatic life, the ship will make stops including Belize and its UNESCO World Heritage Sites like the Blue Hole, Guatemala for Tikal, and the Yucatan peninsula – home to the long-studied ancient Mayan civilizations.

As a leader in luxury expeditions, PONANT will host two new summer Arctic sailings – The Greenland of Great Explorers and the Magnificent Volcanoes of the Aleutian Islands, in the Western Arctic. During the former, guests will visit the world’s largest fjord and sail through the blue icebergs of Narsaq while the latter offers a heart-pumping encounter with some of the world’s most active volcanoes as well as Alaska’s famous old-growth forest.

Beginning in May, PONANT will host a new series of themed cruises that feature onboard speakers and tailored shore excursions that embrace local cultures and dive deeper into the history of the destinations.