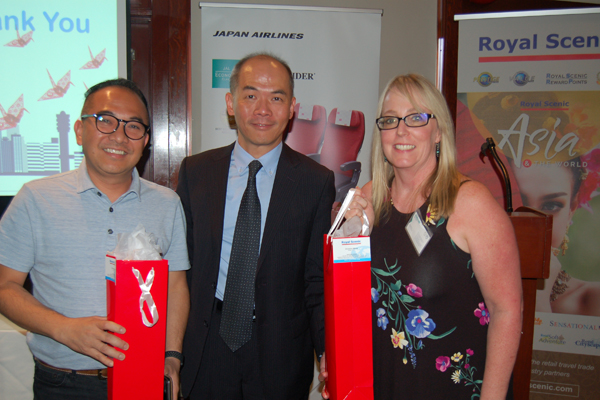 A small super-lux cruise ship that sails inland waters and visits lesser-known ports is amongst some attractive new tourism products in Japan.

The Guntu is more akin to a floating hotel that offers premium services in a distinctly Japanese fashion, while making its way across the quiet waters of the Seto Inland Sea. It has just 19 large cabins for a passenger capacity of 38. The cabins, dining rooms and other public spaces have been designed according to a traditional Japanese minimalist style, with lots of wooden appointments.

The Guntu was described during a recent luncheon presentation by Royal Scenic Holidays and Japan Airlines in Richmond, BC. It has four types of passenger cabins, and all are suite rooms with terraces near the surface of the sea. Services like a spa, sauna, gym and treatment room are provided. A typical route operates for two nights/three days, and docks at off-beat stops like the old-world Miyajima Island, with its Itsukushima Shrine World Cultural Heritage site.

“We will set up a luxury program for this cruise, plus an overland private tour with luxury hotel stay, including an onsen resort and cuisines,” said Ricky Poon, VP Tours for Royal Scenic.

Japan Airlines was a lead sponsor and presenter at the Japan update event, held at the Quilchena Golf Club. JAL executive Serena Lee, director of passenger sales in Canada, updated attendees on news from the airline, including the launch of its Sky Suite II product, which started appearing in JAL business class cabins in June this year. The Sky Suite II was introduced on the Vancouver-Tokyo route on June 1, and is in a 1-2-1 configuration with aisle access for every seat.

Meanwhile, economy class passengers have started enjoying the new Sky Wider economy class cabin that was also launched in June this year. With a 2-3-2 configuration – just seven seats in a row vs. the nine by many carriers – the Sky Wider cabin offers much roomier accommodations. They have an 86 cm seat pitch, which is almost a 10 cm increase compared to a previous cabin.