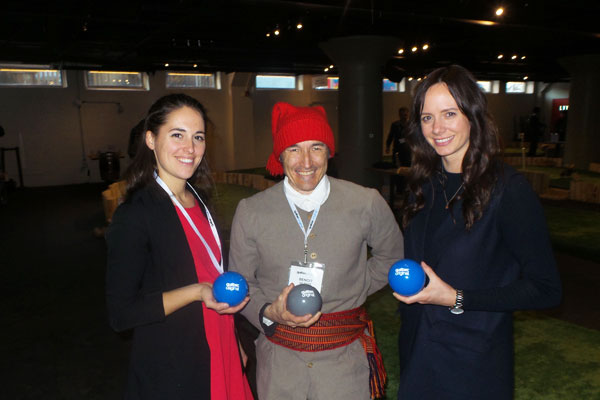 And Leclerc, in Toronto Tuesday with a Quebec delegation, told PressToday that Quebec has plenty of “creative minds” that help ensure that visitors will find plenty of interest to do during a Quebec vacation.

The creativity is shown in part through the arts and music, she continued.

Among Quebecers Leclerc cited for ingenuity is Guy Laliberte, best known for his role in the Cirque du Soleil, and whose latest project is PY1, which Leclerc said will be offering Old Montreal visitors a “multi-sensation” experience in a pyramid-like structure. “It will be very interesting,” Leclerc stated.

Montreal hosts “tons of festivals” throughout the year, she continued.

Leclerc added that those who step back from urban areas will find “beautiful landscapes” and wildlife-viewing experiences can be found in different areas.

Quebec is suited for both long weekend visits and lengthy vacations, she continued.

Pictured holding bocce balls at The Lob, the bocce-golf venue that hosted the event, are Kim Huard-Carette of Quebec Original; Benoit Gilbert of The National Battlefields Commission’s Quebec City office; and Leclerc.