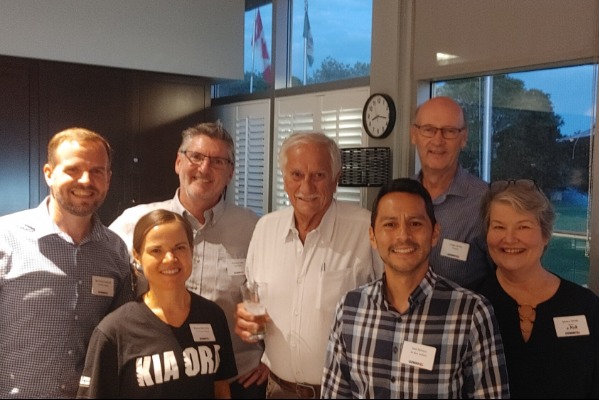 Goway Travel employees and their industry colleagues didn’t jeopardize any opportunity they might have of getting on popular trivia show Jeopardy with their sterling Tuesday night performance.

Goway staffers along with people involved in New Zealand’s and Australia’s tourism trades gathered in Toronto Tuesday night for what would have been the 20th annual Goway-Air New Zealand cricket game, with cricket a popular sport in New Zealand and many other countries Goway sends people to.

The competition was cancelled because of rain, prompting Goway to quickly host a trivia contest, creating teams for a contest that didn’t lob softball questions at contestants, who were asked, for instance, to provide the first name of the man who created the Geiger counter (Hans) and which English locale is called the City of Dreaming Spires (Oxford).

Moira Smith, who oversees Goway’s Africa program and was a member of the Flying Kiwis team, correctly identified Mali as the country Bamako is the capital of, with Smith modestly stating later she knows Africa “probably quite well. My passion is Africa.”

And fellow Flying Kiwi Joel Arroyo of Air New Zealand — who was born in Peru — had no trouble identifying the sol as Peru’s unit of currency.

The event was hosted by affable Goway employee Anthony Saba, VP, South Pacific for Goway, who said the gathering was a welcome development.

“What this is about is restarting social events,” said Saba, who noted Goway was founded over 50 years ago.

Much of the evening’s attention was focused on New Zealand, which has launched a new branding campaign labelled If You Seek, and Brianna McCarthy of Tourism New Zealand said the country has “something for every type of seeker.”

Accompanying New Zealand videos prompted Saba to ask: “Who doesn’t want to jump on a plane and go to New Zealand.”

The evening also saw Goway founder Bruce Hodge welcome new company employees and thank veteran employees for “sticking around for the past couple of years.”

Saba also thanked his coworkers for their efforts and stated Goway has a family-like atmosphere.