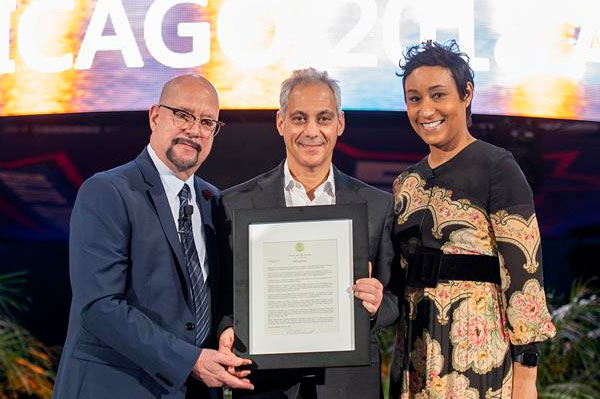 It was quite a celebration as Chicago mayor, Rahm Emanuel and Choose Chicago president & CEO, David Whitaker announced that the city reached record tourism levels in the first quarter of 2018.

The results build on Chicago’s record performance of 55.2 million visitors in 2017 and reflect the city’s growing strength in attracting more leisure visitors and convention delegates.

Mayor Emanuel said of the results: “Tourism in Chicago means jobs throughout Chicago. By continuing to set new tourism records and bring millions more people to Chicago every year, we are creating jobs and generating economic opportunities that reach every Chicago neighbourhood.”

During the first quarter of 2018, total rooms occupied reached a record 2.33 million, an increase of 10.5%. The double-digit growth was fueled by both an increase in leisure rooms booked – up 7.1%, and a significant increase in group rooms booked — up 20.5%. The occupancy rate increased 5.7%, up to 61.2%, which ties for the highest level ever recorded, set over a decade ago.

Said Whitaker: “We’re encouraged to see the momentum continue as Chicago experiences unparalleled growth, especially in winter visitation. A primary focus of Choose Chicago and our partners is to establish Chicago as a 12-month visitor destination for both vacationers and meetings delegates.”

Choose Chicago continues to aggressively work to bring in meetings and conventions that have not previously met in Chicago, including six the city hosted in the first quarter.