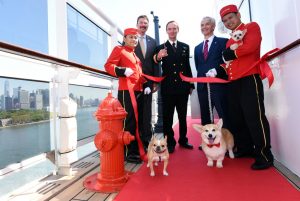 Cunard’s flagship ocean liner Queen Mary 2 sailed into its US homeport, Brooklyn, on July 6 after a significant refit costing in the region of US$132 million.

The refit was conducted in the Blohm + Voss Shipyard in Hamburg, one of the only shipyards in the world large enough to hold Queen Mary 2. It was a 24-hour-a-day operation, with more than a million man hours put into the refurbishment, during a 25-day period.

As the only passenger vessel to carry dogs and cats, Queen Mary 2 also expanded its kennel service during the multi-million dollar renovation. Pet travel has soared in the US over recent years and due to increased demand, Cunard has added 12 new kennels for a total of 24.

“The remastering of Queen Mary 2 continues the transatlantic tradition by the thoughtful contemporizing of the product for today’s discerning traveller, while maintaining the refined design aesthetics and service standards that are deeply based in British style and refinement,” said David Noyes, CEO, Cunard. “The remastering is a testament to Cunard’s attention to detail, incorporating inspiration from our past that continues to propel the powerful Cunard story, which we think will strongly resonate with today’s travellers.”

The vessel has since set sail for Southampton, continuing its schedule of iconic transatlantic crossings.