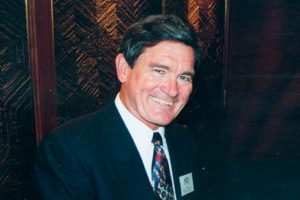 Take a moment today and remember Bruce Hood who passed away on Jan. 5.

Hood, well known for his 21-year career as a referee in the National Hockey League (NHL), was a force in the Canadian travel industry during a time of some remarkable changes.

Hood operated travel agencies during the 1980s and 1990s. He served as the vice-chair of the Travel Industry Council of Ontario (TICO) and as the president of the Association of Canadian Travel Agents (ACTA).

In 2000, Hood was appointed as Canada’s Air Travel Complaints Commissioner, serving in that role until 2002.

Hood was also an author, with his books including “Calling the Shots” and “The Good of the Game.”

ACTA past president, Ron Pradinuk said of Hood: “Bruce was a strong presence on the [ACTA] board which lead to the consolidation of the ACTA chapters into the unified association it is today. He was one of the strongest supporters in our moving forward in hiring the research firm which made this recommendation.”

And Pradinuk continued: “More importantly he was a strong fighter on individual issues but was an integral player in putting the national interests of ACTA first. Without the support of Ontario’s voice, the consolidation could not have happened.”