Home › Destinations › Rendez-vous Canada On Track For A Record

Rendez-vous Canada On Track For A Record 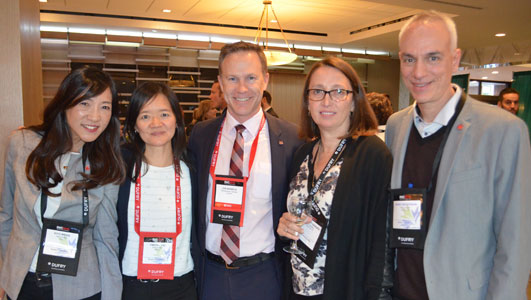 Another attendance record is in sight for Rendez-vous Canada, the international travel trade marketplace for Canadian tourism suppliers, now underway in Halifax. Western Canada editor Ted Davis is on site at the event.

The number of international buyers at the show has already set a new benchmark, as more tourism product buyers from key markets like China, India, France, the U.S., South Korea and Mexico have helped bump the buyer numbers.

More than 600 international and domestic buyers from 29 countries have travelled to Halifax for the trade market and conference. Of those, a total of 446 buyers from the 10 key Destination Canada markets have registered, the highest count in RVC history.

The strong numbers are especially notable given the comparably compact dimensions of the host city Halifax and the facilities at the Halifax Convention Centre.

But they are also indicative of the success that tourism marketing organization Destination Canada has had in helping to generate more visitations to the country, said David Goldstein, president of Destination Canada.

He noted that 20.8 million travellers visited Canada last year and said that the increases are a testament to the tourism industry’s continuing alignment under common goals — that is, to match Destination Canada marketing efforts with buyable, attainable tourism products

Integral to that is the Northstar 22 program, which lays out a Team Canada approach to charting a path toward increased growth with industry partners at the provincial, territorial and city levels. It strives to increase the demand for Canada with innovative marketing, as well as commercial competitiveness in the tourism sector, and increased corporate efficiencies and effectiveness.

“Canada is becoming a hot destination on the world stage,” said Goldstein. “We are cool, not cold!”

And in the case of Chinese buyers specifically, the buzz created by the Canada-China Year of Tourism for 2018 is helping to drive a growing interest in holiday visits to Canada. Travel companies in China have sent 93 buyers to RVC this year, the highest of any country in attendance.

Pictured, Jon Mamela, chief marketing officer for Destination Canada (c), met with Air Canada executives (l-r) Christiane How, Kiyo Weiss, Margaret Skinner and Mark Sniderman, all of whom assembled at “The Office” after work event at the Prince George Hotel, sponsored by Baxter Media and partners.