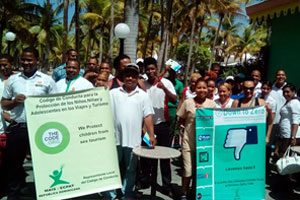 RIU Hotels & Resorts has reaffirmed its commitment and support to the ECPAT Code of Conduct for the Protection of Children and Adolescents Against Sexual Exploitation in Tourism and Travel.

Since 2012, the chain has been holding training workshops for its corporate staff in Spain and for its employees in its hotels around the world, reaching 8,000 workers worldwide last year. By the end of 2017, the chain hopes to bring the total to 15,000.

Another goal of RIU Hotels is to strengthen its relationship with ECPAT affiliates in certain countries.
This is the case of the Dominican Republic, where MAIS-ECPAT, the local representative of the Code of Conduct, has supported the chain in this training effort, starting last month, with awareness-raising courses in RIU hotels in Puerto Plata to fight child prostitution in tourism.

In July, the awareness-raising workshops were also extended to Portugal and Cape Verde through PREVERISK, a consultancy specializing in training and a partner of RIU Hotels for training in sustainability.

This training will be repeated with them in coming months in other RIU destinations, like Aruba, Jamaica, Costa Rica, Panama, the Bahamas, Saint Martin, the USA, Mexico, and Germany.

For Sri Lanka and Mauritius, the training will be provided this fall through local organizations.
In Spain, the partner chosen for staff training is the RANA Foundation, which works on prevention and eradication of child abuse.

The training will begin in September, and a session will be held in all the RIU hotels in the Balearic Islands, Canary Islands and Andalusia.

The hotel chain is also strengthening its partnerships with the leading authorities in the tourism sector and international organizations, such as the World Tourism Organization (UNTWO).