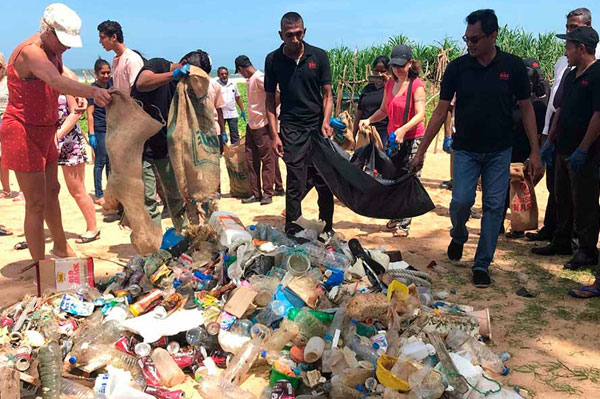 RIU Hotels & Resorts participated in the United Nations’ World Environment Day 2018, #BeatPlasticPollution, by organizing clean-ups of coastal areas and beaches in most of the destinations it operates in.

Fifty RIU hotels participated in the worldwide clean-up with staff, guests and local communities helping out. In the Americas, RIU staff in Panama took care of the Playa Blanca zone in Río Hato, while in Guanacaste, Costa Rica, waste was collected along the four-km stretch of highway from Nuevo Colón to Playa de Matapalo. Punta Cana saw a clean-up in Playa Macao and Arena Gorda, while on Aruba the cleanup covered the area between Signature Park and Depalm Pier in Palm Beach.

In Jamaica, people covered three coastal zones – Seven Mile Beach in Negril, Mahee Bay in Montego Bay and the coast near Mammee Beach in Ocho Ríos. Mexico was another destination where waste collections were organized. At the new Riu Dunamar in Costa Mujeres, they took care of the most neglected coastline in the area of Isla Blanca, and at the Riu Palace Las Américas in Cancún they covered Playa Mocambo. The Riu Palace Pacifico and the Riu Vallarta covered the green areas around the resorts, while the hotels in Los Cabos held a clean-up on El Médano beach. In Jalisco, staff and guests at the Riu Emerald Bay took care of the area of Playa Brujas, while the Riu Plaza Guadalajara hotel collected waste along the train tracks in Guadalajara.

On the other side of the globe, at the Riu Sri Lanka, besides cleaning up Ahungalla beach, and planted 50 coconut palms. On the island of Mauritius, the company’s two resorts, the Riu Le Morne and Riu Creole, participated in the waste collection along the entire coastline between the two hotels.

In addition to waste collection, many hotels decided to organize other activities related to the environment. At the Riu Don Miguel, in Gran Canaria, a Solidarity and Environmental Market focused on the creation of all types of utensils out of plastic. The proceeds of this market will be donated to the Plant-for-the-Planet foundation. In Playa del Carmen, Mexico, the six Riu resorts in Riviera Maya joined forces to organize the RIU Environment Fair, which was held in the gardens of the Riu Palace Mexico hotel. Guests and RIU staff members took part in a recycling workshop where they learned to create art using recycled materials.