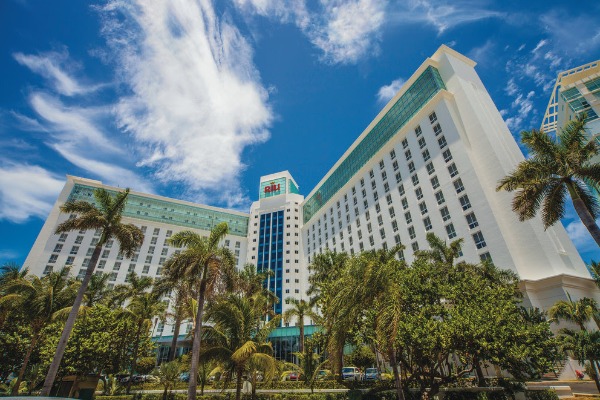 RIU Hotels has announced the reopening of several of its hotels in Aruba, the Dominican Republic and the Bahamas, part of its goal of reopening in all the destinations in the Caribbean where it operates.

Following these openings, the chain will have resumed activity in 16 of the 19 countries where it operates, pursuing its goal of gradually reactivating its 99 hotels. The Riu Palace Bavaro was the first of the six RIU hotels in Punta Cana to resume activity after the March closures. The hotel, located on Arena Gorda beach, offers 24-hour All-Inclusive service to guests in its 610 rooms. Guests can also enjoy the Splash Water World water park, located in the RIU resort in Punta Cana.

In the Bahamas, the chain’s only hotel in the destination, the Riu Palace Paradise Island, has reopened. The hotel was renovated in 2017. Its refurbished facilities are accompanied by RIU’s 24-hour All-Inclusive service, which guests in its 379 rooms can enjoy. “Among the hotel’s most spectacular features is the view from its Infinity Pool,” Riu says.

The Riu Palace Aruba is the first hotel the chain opened on the island. With 450 rooms and 24-hour All-Inclusive service, the hotel combines the “details and sophistication of the Riu Palace range with the highest standards for RIU service and facilities, with two large outdoor pools.”

These openings join that of the Riu Reggae, in Jamaica, the second hotel the chain has reopened in the country after the opening of the Riu Ocho Rios. The Riu Reggae, located in Montego Bay, was built in 2016 and has 454 rooms. Its guests can enjoy Mahoe Bay beach, the site of the hotel, in addition “to Riu’s renowned 24-hour All-Inclusive service and three magnificent outdoor pools.”

“With these openings, RIU has successfully opened several of its hotels in all the countries and Caribbean destinations where it operates. In the Mexican Caribbean, where it has already opened its four hotels in Cancun, only the four establishments in Playa de Carmen (the opening of two of them, the Riu Palace Riviera Maya and the Riu Playacar has already been announced) and one in Costa Mujeres (where Riu has already announced the reactivation of the Riu Dunamar) have yet to open. In early July, the chain will have a total of 12 of its 27 establishments in the Caribbean open, with the goal of continuing to reopen hotels in coming weeks.”

The chain spent weeks preparing a Post-COVID Manual for the hotel with 17 protocols with consulting firm Preverisk. “It covers in a thoroughgoing and comprehensive way all the details involved in operating the hotel, thereby offering the maximum health and safety guarantees to its guests and employees. Application of these protocols requires specific training by departments of their staff members, who will be returning to work gradually,” Riu reports.