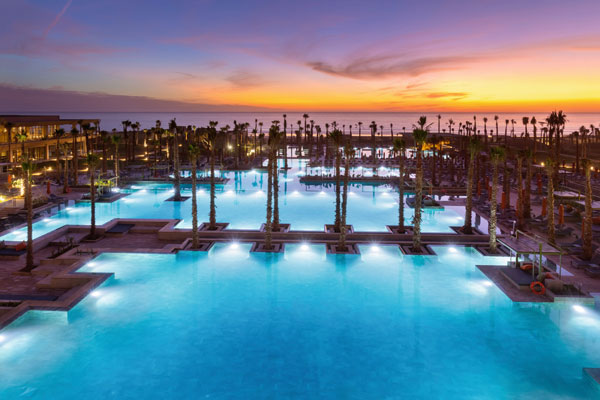 RIU Hotels & Resorts has opened the Riu Palace Tikida Taghazout, a five-star 24-hour all-inclusive hotel located in the Taghazout Bay area, which is Morocco’s new tourist destination, 15 kilometres to the north of Agadir. The hotel is RIU’s sixth in Morocco with its Moroccan partner Tikida Group, and faces Atlantic Ocean on a paradise-like beach with an exclusive sun lounger area for guests.

The hotel covers over 18 hectares at the heart of the main Atlantic Plan Azur resort in Morocco, a plan that aims to increase the number of tourists in 2020. It offers all the services of the prestigious Riu Palace range, and has 504 rooms, including five luxury swim-up suites that link directly to one of the main pools.

In addition, there is a buffet featuring international cuisine in the main restaurant Le Tara, and three themed restaurants, Krystal, the Bâbor steakhouse for dinners and Le Musk, which offers Moroccan specialities.

Riu Palace Tikida Taghazout has almost 45,000 square metres of terraces and gardens in which five enormous pools are set out in a cascade, with Bali beds around them. For guests who want to be even closer to the sea, the hotel has two infinity pools facing the beach, as well as an indoor pool and one for the youngest members of the family. It also offers a complete Tikida Spa with an extensive menu of beauty and relaxation treatments, along with a gym, steam room, sauna and jacuzzi.

The hotel offers children’s entertainment at RiuLand, daytime entertainment for adults, an evening program of shows and live music as well as many activities at the RiuArt studio.
What’s more, its seafront location 10 minutes from the Tazegzout golf course and five kilometres from the fishing town means visitors can enjoy the true essence of Taghazout Bay, meandering through its backstreets, enjoying its bars, cafés and authentic bazaars.

RIU now has six hotels in Morocco: three in the Agadir region, two in Marrakech and this one in Taghazout.

The complete renovation of Riu Tikida Garden (Marrakech) is planned for next winter season 2019/2020.