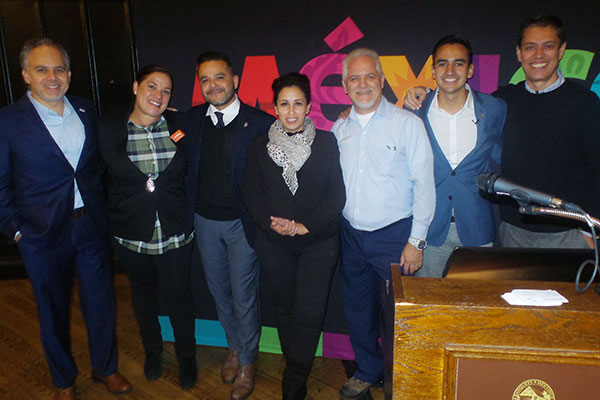 The Riviera Nayarit Convention and Visitors Bureau and Visit Puerto Vallarta are subscribing to the old adage that there’s strength in numbers.

The tourism promotion bodies – which represent bordering Pacific coast Mexican destinations – are teaming up to attract tourists to the region they both lie in, a development underscored by a joint promotion in Toronto Monday.

together” on a tourism promotion campaign, Jorge Rodriguez of Visit Puerto Vallarta told the audience.

Rodriguez told the gathering that Puerto Vallarta sees around 360 days of sunshine a year, and both year-round water and weather temperatures average 77F in a destination that he said is a “very traditional area with a modern infrastructure.”

Rodriguez added those visiting his destination will also find colonial architecture that has a backdrop of both ocean and mountains, and the surrounding area has some 250 species of birds, seasonal humpback whale-watching and outdoors enthusiasts can hike in the mountains.

Meanwhile, Carlos Eguiarte of the Riviera Nayarit Convention & Visitors Bureau said Nayarit has over 300 kms of coast but those vacationing in the fast-growing Riviera Nayarit can easily find parts of a “beautiful coastline” home to secluded “beaches where you can go and you’re on your own.”

The Riviera Nayarit has seen dramatic development in the past couple of decades that include the upscale retreat of Punta de Mita, home to the likes of a Four Seasons and two golf courses.

Other destinations include the fun town of Sayulita, which Eguiarte praised as a surfing mecca.

Eguiarte said Nayarit’s Marietas Islands were labeled the “small Galapagos” by famed oceanographer Jacques Cousteau who was impressed by the birdlife found on them.

One of the islands has an “exotic” beach that visitors must swim to and reach through a cave, he reported.