Home › Destinations › On The Road At Gala Vallarta

On The Road At Gala Vallarta 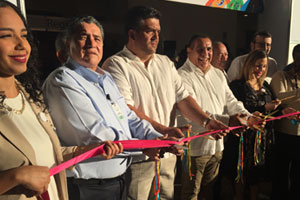 The news out of Puerto Vallarta, Mexico — dubbed the world’s friendliest city — is all positive with visitor numbers on the rise and several key tourism projects on the way.

This and more was revealed at the 23rd edition of the city’s annual tourism show, Gala Vallarta 2017.

PressToday’s Greg Coates is in Puerto Vallarta and reports news of the construction of a new mega cruise pier, scheduled to open in March 2018, a project that is being combined with the addition of a large “authentic” Mexican shopping centre and a new aquarium, which will be the largest in Latin America.

In another first, Puerto Magico won’t only be for cruise passengers, but also open to the public.

Port official Carlos Gerard commented, “Our commitment to the cruise industry is strong and we will make history with this port. It will be one of the icons of Puerto Vallarta.”

Another new infrastructure improvement is a new highway linking Puerto Vallarta with Guadalajara. Phase one is complete with the whole highway expected to be opened next year.

Agustin Alavarez, director of the Puerto Vallarta Tourism Board, said a joint marketing campaign launched between Puerto Vallarta and neighbouring Riviera Nayarit is going well and will be continued.

“We’re very proud of our destination. We believe we are the most authentic Mexican beach destination in the country,” he said. “We’ve been called the friendliest city in the world and it’s true. It’s safe and it’s very authentic. I’m talking food, the people and the natural experiences.”

Among the Canadian representatives at Gala Vallarta 2017 are Air Canada, WestJet, Transat, Sunwing and TravelBrands.