Room To Move With Goway 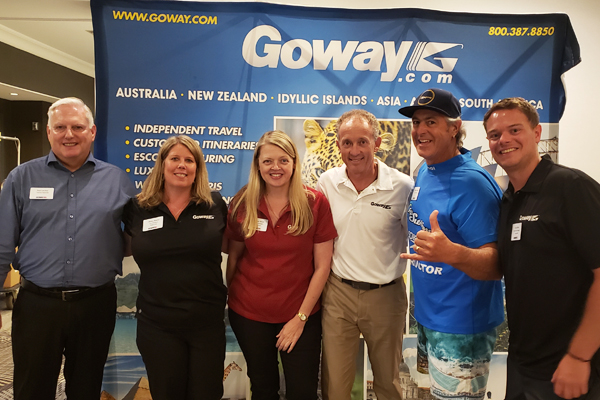 Craig Wachholz can offer those vacationing in Australia room (to manoeuvre on ocean water) and (a surf) board.

Wachholz is with Sydney-based Let’s Go Surfing, which offers surfing instructions in Sydney and elsewhere, and says riding waves is an iconic activity in his homeland.

“It’s what the locals do,” says Wachholz, in Toronto Wednesday for a Goway Travel event promoting Australia and New Zealand.

“It’s not about seeing a destination, it’s about experiencing it,” she told Press Today.

Goway brought dozens of Australian and New Zealand hoteliers and tourist board, airline and tourist board representatives to the event, where they were able to meet with some 80 travel agents.

“Part of this is to really inspire travel agents to offer Downunder,” Rourke said. “The airfares have been been cheaper and there’s a choice of routes.

The gathering used to showcase Australia alone “but news of the event crossed the Tasman Sea and I had some Kiwi suppliers wanting to come so we invited them as well,” Rourke said.

The event was held at a time when Goway’s 50th anniversary is drawing nearer. The company plans to mark the half-century milestone with a lengthy promotion.

Rourke also noted that Goway has an special that offers agents travel in three separate periods this fall at special rates. The rates start at $2,449 per person (companion rates start at $3,099) and include return Bula Buddies airfare with Fiji Airways from Los Angeles to Sydney, then Brisbane to Los Angeles; Virgin Australia airfares from Sydney to Cairns to Brisbane; roundtrip transfers in Sydney and Cairns; four nights of four-star accommodations in Sydney; a city tour; a full-day Blue Mountains tour; four nights at a four-star hotel in Cairns; Quicksilver Outer Barrier Reef cruise with lunch; and full-day Kuranda tour with Kuranda Scenic Rail and Skyrail.

Seen in the Photo: