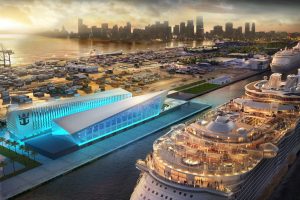 Royal Caribbean Cruises Ltd. has signed an agreement with Miami-Dade County to construct and operate a new cruise terminal at PortMiami, on land leased from the County.

The new terminal will be a striking addition to PortMiami and will serve as homeport to Royal Caribbean International ships, including a 5,400-passenger Oasis-class ship, the world’s largest. The agreement will come before the Miami-Dade County Board of County Commissioners on July 6.

“We are truly excited to be working with Miami-Dade County and PortMiami to create not just another cruise terminal, but a truly iconic building,” said Richard D. Fain, chairman and CEO for Royal Caribbean Cruises Ltd. “This new terminal is a symbol of our commitment to Miami, the city where our company first started almost 50 years ago. We can’t wait to bring an Oasis-class ship to PortMiami.” 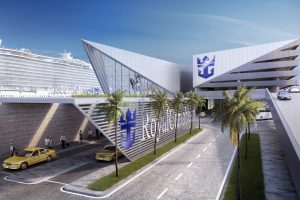