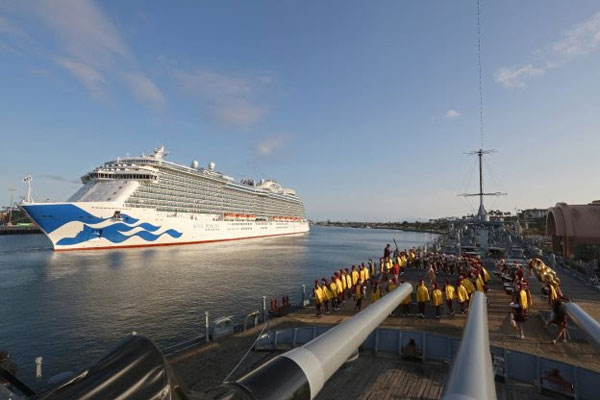 Princess Cruises’ Royal Princess has arrived at the Port of Los Angeles, its new home port, where it will offer sailings to sought-after destinations including the Mexican Riviera, the California Coast and Alaska.

In celebration of Royal Princess’ maiden call to the Port of Los Angeles and the cruise line’s biggest West Coast cruise season, a “Royal” fanfare marked the occasion highlighting the arrival of one of Princess Cruises’ newest and most elegant ships.

Guests and well-wishers were treated to a fireworks display as Royal Princess departed on its first seven-day Mexican Riviera cruise – the same itinerary made famous by Princess and “The Love Boat.”

Royal Princess sails weekly to the Mexican Riviera from Los Angeles (San Pedro) through April 27, then sails north to Vancouver for a season of Alaska cruises exploring The Great Land before returning to Los Angeles in September where the ship will home port for six months, continuing cruises to Alaska, the Mexican Riviera and the California coast.