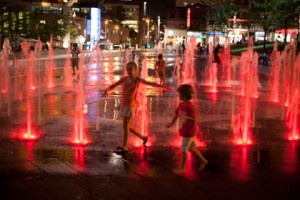 On the perimeter of Old Montreal, near to the St. Lawrence River, delegates to RVC 2016 can explore the roots of the city at the famous Pointe-à-Callière Museum of Archeology and History. Part of its interior descends under Montreal’s current street level, where the city’s original river side setting has been unearthed and preserved. It is a fascinating window on the early life of Montreal, nearly four centuries past.

This window has been opened even wider with the recent debut of the “Fragments of Humanity. Archaeology in Québec” exhibit at the museum. This is the first major exhibition dedicated entirely to Québec archaeology and some 350 artifacts are featured. Amongst them is a dugout canoe made out of a single piece of wood, which was discovered by divers in a lake. The preserved 15th century dugout is very rare, and was below the surface of the water for about 500 years.

The RVC Today newsletter is a sponsor driven communication piece that is designed to educate RVC delegates on important aspects of the Canadian tourism industry. Watch out for RVC Today each week as the start of Rendez-vous 2016 approaches – and after the event as well.