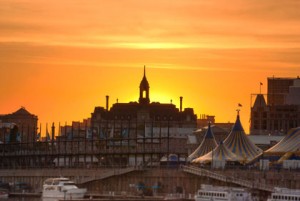 Delegates attending Rendez-vous Canada 2016 this coming April 24 to 27 have the good fortune of staying in Canada’s original cosmopolitan city – the largest meeting place of the nation’s two official languages.

Montreal is where the historical divide between English and French Canada was bridged in centuries past, when the burgeoning nation was still the subject of contentious occupation by the great powers of Europe. It is almost 375 years since Montreal was established on the St. Lawrence River as part of New France, and the city will celebrate that important birthday in 2017.

RVC 2016 visitors to Montreal will quickly come to realize that this linguistic mix gives the city some very compelling qualities. Delegates – most of whom will be relying on English as their language of business – will find that Montreal’s wonderful Francophone culture is easily accessible to them. They will experience it in the bistros, dining rooms, museums and many attractions that await them as soon as they step outside their hotel lobbies.

The RVC Today newsletter is a sponsor driven communication piece that is designed to educate RVC delegates on important aspects of the Canadian tourism industry – including the role of Montreal in that industry. Watch out for RVC Today each week as the start of Rendez-vous 2016 approaches – and after the event as well.