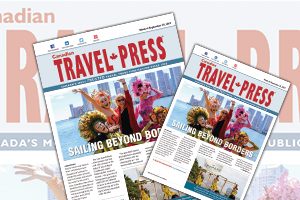 For Lisa Lutoff-Perlo – who remains the first and only woman at the helm of one of Royal Caribbean’s multi-billion dollar vacation brands – the pressure of being named president and CEO of Celebrity Cruises in 2014 extended beyond living up to the expectations associated with the role, reports assistant editor Ann Ruppenstein in this week’s digital edition of Canadian Travel Press.

“You also don’t want to let people down, especially other women, who are cheering you on – you want to make sure you are successful because you are the first and you want others to be able to follow in your path and get the same opportunities you get as well,” she tells Canadian Travel Press. “So when you are the first, you always want to make sure that you live up to those expectations in a way that makes the path easier for those who follow after you.”

Regardless of gender, she says being the CEO of any company where financial performances and targets are public, comes with big responsibilities.

“You constantly need to think about new ways to achieve those metrics, despite some things that might be going on in the world that aren’t working in your favour and so that always comes with its own stress and pressure, absolutely,” she adds.

A little bit of history

After working in the hotel industry in the early 1980s, Lutoff-Perlo’s first foray into travel came after perusing the help wanted section in The Boston Globe in search of a change.

“I found a job that seemed interesting to me and it intrigued me a little bit, which was working for a big travel company at the time, Crimson Travel in Boston, as a group cruise sales person,” she recalls. “It was really all about finding groups – families, corporate – different types of groups, and convincing them to go on cruises.”

During this time the company was a big producer for Royal Caribbean, and when the district sales manager for her area got relocated to Miami, she decided to apply for the post.

“His position became available and that’s when I thought maybe I should throw my hat into the ring for that job and so that was in 1985, I applied for a district sales manager position at Royal Caribbean,” she says.

Not only did she land the job, but four years later it was her turn to make the move to South Florida, after earning a promotion to regional sales manager in 1989.

“The rest is history,” she says. “I’ve been with the company for 32 years and I’ve worked my way around the entire sales organization across both brands a couple of times and ultimately landed here in this wonderful job.”

To this day, she says her initial experience on the front-line has been invaluable throughout her career, from operations to sales to CEO.

“Being a front-line agent has come in handy in every single job that I’ve had,” she says. “In this role as I look at the macro strategic things that we do as a brand with my team, knowing what travel agents need from us is always at the forefront of decisions that we make and things that we do – whether it’s through our sales and marketing programs, through the different things that we do on board, or new ships that we’re designing – they are always at the forefront of what is it that they need from Celebrity because I believe they are such a critical part of how our brand is going to win.”

For the full story check out this week’s digital edition of Canadian Travel Press.