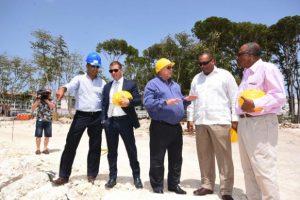 Sandals Resorts International has officially broken ground on a multi-million dollar expansion of its Dover Beach property in Barbados, marking the commencement of the construction of an additional 222 rooms and suites.

This expansion, when complete in November 2017, will add to the existing 280-room count and firmly place the property as the largest Sandals resort in the Eastern Caribbean.

The official groundbreaking ceremony took place on June 8 and was led by SRI’s chairman Gordon ‘Butch’ Stewart and chief executive officer Adam Stewart, along with Barbados Minister of Tourism Richard Sealy, Minister of Health and Parliamentary Representative John Boyce and several tourism and business officials associated with the massive undertaking.

With the expansion, Sandals is set to create an additional 520 new jobs bringing the total direct employment to more than 1,100. According to chairman Stewart, Sandals Resorts is exceedingly grateful for the “Bajan support and hospitality” extended to the Sandals brand. He gave his assurance that when completed, the expansion will set the stage for what is the continued evolution of hospitality in the Caribbean.

On completion, the resort will offer five additional restaurants, a new spa and wellness sanctuary, three new swimming pools and an entertainment pavilion complete with a bowling alley, the first for a Sandals resort. Recognizing the growing demand for meetings and convention facilities in Barbados, the Sandals expansion will also feature a state-of-the- art 10,500 sq. ft. conference facility capable of seating 550 people.

(photo courtesy of The Barbados Advocate)