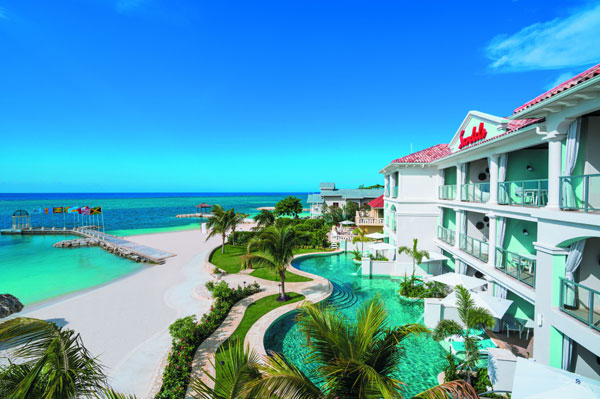 First opened nearly four decades ago by founder and chairman Gordon “Butch” Stewart, Sandals Montego Bay has remained the heart of Sandals Resorts as the company has grown, expanding across multiple brands and islands.

With a concrete vision of revolutionizing Caribbean hospitality, in 1981 Stewart purchased the Bay Roc in Montego Bay, Jamaica, a rundown hotel next to the airport that would become Sandals Montego Bay. Despite any misgivings from Jamaica’s hospitality community, Stewart set out to exceed expectations – a concept that became his marketing modus operandi – and did, creating the first of what is today, the “most popular award-winning, all-inclusive resort chain in the world.” And now with this renovation, officials say Sandals Montego Bay is again transformed into the pinnacle of progress and luxury in the Caribbean.

“With this re-imaging of Sandals Montego Bay, we have again brought the most innovative concepts in hospitality to the shores of Montego Bay,” said Stewart. “This was the first Sandals resort we opened, and it is with great honour that we reintroduce it to the world as the first in a new generation of luxury hotels, hinged on our infamous core competency – exceeding guests’ expectations.”

Following the recent renovation, Sandals Montego Bay boasts all new room offerings, a new “living room” lobby area, and a high-tech conference centre that can host up to 300 guests.

A new over-the-water chapel is also set to be unveiled where couples can tie the knot with 360-degree, panoramic water views.