One Bite, Or Sip, At A Time 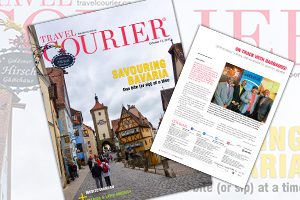 The mayor of Nuremberg, Ulrich Maly, said it best – between hearty doses of sausages and pieces of roasted pork, wine, beer and “potato dumplings sized like children’s heads,” residents of the Bavarian city certainly know how to enjoy life to the fullest, reports assistant editor, Ann Ruppenstein in this week’s digital edition of Travel Courier.

“We have a medical statistic that tells us that we in Nuremberg are dying a little earlier than the rest of the Germans, but before, we are living much better,” he quipped.

As travellers continue to eat and drink their way through destinations as a means of getting an authentic taste for a country, the German National Tourist Board is set to launch Culinary Germany as its campaign theme for 2018.

While the European nation is often associated with being the land of beer (after all, it has a beer purity law dating back more than 500 years) and sausages (there’s certainly plenty of that, too) the local gastronomy extends far beyond suds and wurst. In fact, some may not know that Germany is among the top countries with the most Michelin-starred restaurants.

“Travellers nowadays would like to have authentic experiences: to live, breathe and to really indulge in a destination instead of rushing it,” Antje Splettstoesser, director of the German National Tourist Office, tells Travel Courier in an exclusive interview.

And she continued: “Slow down, learn some German words (Prost is a good one), sit in a café and watch locals, visit world class museums, or take the time to cycle through the English Garden and stop at one of the most beautiful beer gardens right on the lake.”

With direct lift from Canada to Munich, Frankfurt and Berlin currently underway, it’s never been more convenient for Canadians to take off to Germany.

“You can soak up the atmosphere and meet some locals while enjoying your mass of beer,” she adds. “Maß, or mass in English, is another favourite word in German. Each mass has 1-litre – or more than two pints of beer in one glass – German efficiency at its best!”

Although there are no shortage of places to visit across the country, here are a few delights that await clients in Bavaria, outside of the ever-popular city of Munich.