Savouring The Flavour Of Thailand 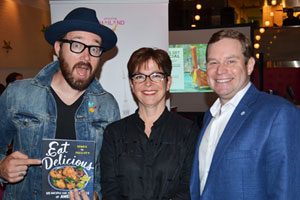 The popular combination of food and photography was given a full and tasty workout at a recent event in Vancouver hosted by The Travel Corporation and the Tourism Authority of Thailand, reports Press Today’s Ted Davis.

Some of the most colourful and flavourful dishes of Thai cuisine were served at Pink Elephant Thai in downtown Vancouver as part of the event.

These were an inspiring motivation for attendees, who took in a presentation by guest speaker Dennis Prescott, who is a foodie, photographer and author of a book named Eat Delicious.

He described how his publishing motivations were sparked by life on the road as a guitarist in a band, during which he learned about cuisine at international destinations, plus the basics about meal preparation.

After hanging up his guitar he embarked on a second career as a foodie author and photographer.

As co-sponsors, the TAT and The Travel Corporation had the opportunity to present their own product perspectives and news. For instance, Kayla Shubert of the TAT quoted stats saying that about 35% of travel has a foodie component – and that with its well known and loved cuisine, Thailand is an ideal foodie destination.

Author Prescott bolstered that stat with one of his own – that one in three of all Instagram photos is a food shot of some kind.

And Jeff Element, president of The Travel Corporation, told attending media guests that the company has four tour operator options that offer Thailand programs, ranging from budget priced to high end, structured to unstructured. These include Contiki, BusAbout, Trafalgar and Uniworld.

Through these operators, The Travel Corporation is prioritizing specified target markets, including millennials, baby boomers, gastronomy, health & wellness and local experiences during 2017 and 2018.

In the photo
Leading a Thailand travel event for media in Vancouver recently was (l. to r.) author Dennis Prescott, Tourism Authority of Thailand rep for Canada Kayla Shubert and The Travel Corporation president Jeff Element.