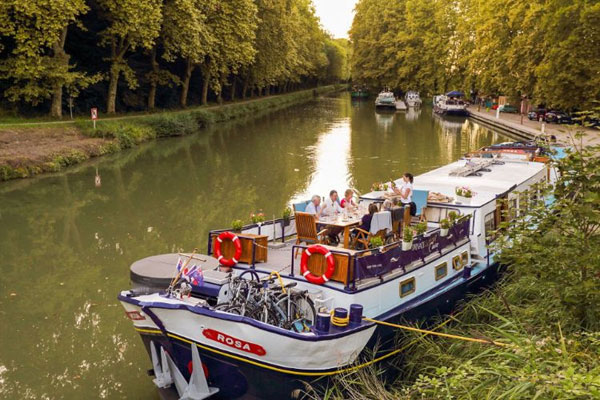 With ship-wide upgrades that include a completely refurbished saloon, an on-deck hot tub and an intimate new bar stocked with fine wines and spirits, European Waterways’ eight-passenger Rosa hotel barge is a prime example of the company’s commitment to providing guests with a cruising experience defined by luxury and comfort.

The barge, which cruises the Gascony and Bordeaux regions of southwest France – areas legendary for their gastronomic offerings – provides wine tastings and unique experiential excursions that include a visit to a cheese-making farm in Ramier and private afternoon tea with the countess of an 18th century château.

“Gascony is one of the most beautiful and unspoiled regions of southwest France, where the Pyrenees Mountains serve as a dramatic backdrop,” said Derek Banks, managing director of European Waterways. “Rosa cruises deep into the heart of this idyllic countryside, where perfectly preserved medieval villages and churches and the old-world charm of its marketplaces transport guests to another era in history.”

While people are familiar with France’s most popular cheeses that include Brie, Roquefort and Munster, the country produces some 1,000 different types of cheeses. Among Rosa’s most “tasty” excursions is a visit to an artisanal dairy farm in Ramier, where guests can watch the cheese making process and taste the final results. Also on tap is a visit to the market at Castelsarrasin, where a wide variety of local produce reflects the richness of French gastronomy and the unique flavors of the region.

In addition to savoring some of the region’s best wines with meals on-board, Rosa guests will visit the Château Bellevue la Fôret, the largest privately owned wine estate in the region.

Guests can also take a stroll through Montauban, a charming fortified town along the banks of the River Tarn.

One of Rosa’s newest excursions is a visit to the 18th century Château de la Motte, a former Viking motte-and-bailey castle that was transformed into a private estate. The château’s restoration was featured in a documentary that followed the current owners as they renovated its 45 rooms, introducing modern conveniences such as running water, heating and electricity. Its resident countess will lead European Waterways’ guests on an exclusive tour that concludes with tea in one of her private rooms and an account of the château’s famous association with the Kings of France.